skip to main | skip to sidebar

Here is the complete entire quotation from the previous posting:

Until one is committed, there is hesitancy, the chance to draw back, always ineffectiveness, concerning all acts of initiative (and creation). There is an elementary truth the ignorance of which kills countless ideas and splendid plans: that the moment one definitely commits oneself, then providence moves too. All sorts of things occur to help one that would never otherwise have occurred. A whole stream of events issues from the decision, raising in one’s favor all manner of unforeseen incidents and meetings and material assistance which no man could have dreamed would have come his way. Whatever you can do or dream you can, begin it. Boldness has genius, power, and magic in it. Begin it now.

-William Hutchinson Murray, Scottish mountaineer, 1913-1996
I have a copy of this quote beside my computer, and I had always seen the attribution of Johann Wolfgang von Goethe. But if the Goethe Society gives the provenance to Murray, there should be no debate. But there is an underlying connection between the Scottish mountaineer and the famous German writer – and that is climbing and conquering.
Goethe was afraid of heights, a pervasive phobia and a overwhelming fear of high places. So when he was a student at the University of Strasbourg (now in France) he would challenge himself to climb to the top of the cathedral of Strasbourg each day. (Cathédrale Notre-Dame-de-Strasbourg, known as one of the most beautiful gothic cathedrals in Europe. Indeed, it is considered the edifice that had practically inspired Goethe to launch the Romantic Movement.)
When Goethe was there, the cathedral was the tallest building in the world at 472 ft at the spire. Each day, he would compel himself to climb the narrow curving stone stairway to the observation platform and up the spire. Each day was the same challenge. The views from there are sweeping and magnificent, a commanding experience. It is said that on a clear day, the view encompasses even to the Vosges and Black Forrest from the top of this platform. As one climbs the worn stone steps, one passes different slits of windows with varying vistas, so young Goethe would have had the sensation of a visual record of increase in height.
There is purported to be graffiti by Goethe scraped on one of the walls at the top on two sides of the platform, though I have not seen it. I imagine that he might have carved it on the last day of his studies, just before he left for his home. Perhaps he had a penknife secreted in his linen coat pocket that day, as he mounted for that last times the steep stairway. He would have known the number of steps between the second and third small windows, the total number of steps in to the vista at the top. By that time, with the number of repetitions of actions, he would recognize the worn irregular character and slope of each step, knowing also that he was part of that history of that use. Perhaps that day, at the top, under the full summer sun, he would have etched his name carefully as a triumph of humanity and creation over fear.
Goethe described the Cathedral’s impact : "The more I contemplate the façade of the Cathedral, the more I am convinced of my first impression that its loftiness is linked to its beauty."
This is what the artist must do each day – we must be fearless. But that fearlessness is won only by each day challenging our fears – both the small petty, pesky ones as well as the raging consuming fires. Each day we must climb the curving steps of the tallest tower in the world, ever-upward. Each step brings us closer, and each day we must climb.
++++++++++++++++++++++++++++++++++++++++
Resources:
http://incli-nation.com/2009/03/17/goethe-faust-and-tricky-translations/ http://www.goethesociety.org/pages/quotescom.html http://en.wikipedia.org/wiki/Strasbourg_Cathedral
Posted by Karina Nishi Marcus at 8:15 AM No comments:

Ring in the Happy New Year!

This is a time for a new start with a twist on convoluted resolutions. This Chinese Lunar New Year (the tiger’s time) presents an opportunity for commencing with a new plan, inspired by the ideas of Alyson B. Stanfield, author of “I’d Rather Be in the Studio.” (The title resonates like a bell.) I have many new strategies to implement, and anticipate, with a purring pleasure, many various and varied adventures exploring different aspects of my artist’s career.

The complete plan is an intricate document that required an astonishing amount of time to formulate and formalize. But it took the amount of time needed.

It is a grand plan, even with a little dash of audacity, but I am feeling a strong motivation – now is the time. I am passionate for change. That is why I have adopted my motto for this year: BE BOLD. It was inspired by the passage in that statement that turned out to be attributed to a Scottish climber and not Goethe:

“Whatever you can do or dream you can, begin it. Boldness has genius, power and magic in it. Begin it now.”

Some contend that sharing such goals dissipates creative energy and muffles motivation, but this is a goal that I want to assure:

This Year for my Art:

“I’d Rather Be in the Studio! The Artist's No-Excuse Guide to Self-Promotion”

Posted by Karina Nishi Marcus at 8:12 AM No comments: 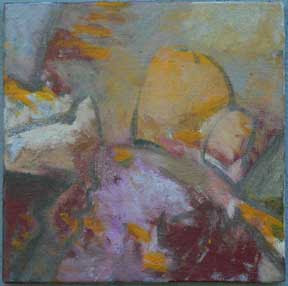 This is the piece that I am showing this evening at Sonoma State University Art Gallery for their fundraiser, silent-auction “Art from the Heart.”

Donations to these sorts of fundraisers can be contentious among artists, as they are requested to donate to many events, and yet the official government stance is the art work is only worth the raw materials: canvas and pigment. It does not recognize that the contribution is the artist’s vision, time, effort and experience that transforms those base matters into a luminous object – a work of art.

But I love to contribute to the venture, as I am passionately in favor of education in all its myriad forms. The gallery at the state university hosts several engaging exhibits each year, plus they sponsor a wide range of artist’s talks that are open to all. With the state of funds for education in California this year – venues such as this are a worthy recipient of artists’ donations.

And the event itself it quite a festive event!

Posted by Karina Nishi Marcus at 3:43 PM No comments:

I ought'a be in pictures 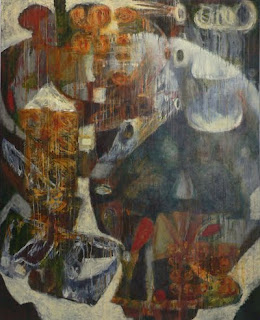 Hugh Grant in "Did You Hear about the Morgans?"
I am giddy that I have a painting in a major motion picture.
It was stressful and exciting to watch the movie. I did not know where my painting might be, or if it ended up on the proverbial cutting room floor. In fact, it was not until the very last scene of the movie, in the couple's new New York apartment that I finally saw it. It is hung side-ways (which only goes to show one of my composition principles that good composition can be seen from multiple angles) and poorly lit -- but hey -- that is the director's prerogative.

I have included an image of how I choose to orient the painting so that you can see it in its entirety. To have a painting in a movie is a first time experience for me and if I might trumpet a bit, I am very proud.
To see more of my work, please visit my new, redesigned website:
http://www.paintpilgrim.com
Posted by Karina Nishi Marcus at 7:05 PM 3 comments:

Karina Nishi Marcus
Santa Rosa, Northern California, United States
I am an abstract painter working mainly in acrylics and mixed media. With a wild passion for color, I follow the gestures of intuition in continuous exploration into a deeper mystery.